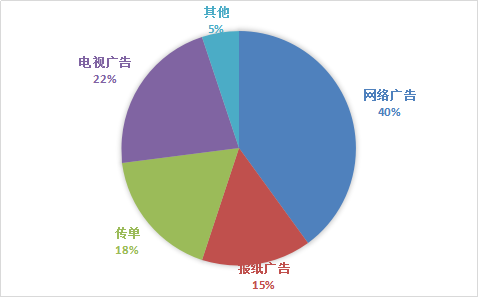 As is clearly mirrored in the above pie chart, the proportion of ways for shoppers to obtain the product information demonstrates evident distinctions in 2014. According to the data given, the Internet advertisement takes a lion’s share, accounting for 40%. While TV commercials and flyers take away respectively 22% and 18% of the whole proportion.

What triggers this phenomenon? It is not difficult to put forward several factors responsible for this. Initially, with the accelerated advancement of the Internet technology, the increase of netizens is apparently noticed by us. Thus, numerous individuals tend to buy products online instead of going for the real shop in the streets or shopping malls. To continue, TVs are still widely in use for most families, which supports a strong purchase power by TV commercials. Terminally, quite a few folks are giving out flyers to the passers-by, and most of them would like to accept it, and this is the very reason why flyers rank the third in the pie chart.

In view of the arguments above, we can conclude that the current phenomenon is of no surprise. And therefore, it can be predicted that the network way will undoubtedly advance in the years ahead.

What is explicitly demonstrated in the above chart is the sales changes of online shopping in domestic market over the period from 2011 to 2015. The turnover of e-commerce saw a substantial gain from approximately 800 billion in 2011 to 2500 billion in 2014. Surprisingly, it is predicted that the figure will continue to soar dramatically to roughly 3400 billion in2015.

We can easily recognize its advantages as follows: e-commerce, which is extremely convenient, can save us a great amount of precious time and we can buy products everywhere you want as long as we can surf online. However, for all the advantages mentioned above, online trading is by no means without its limitations as listed below: we may be cheated by some online retailers, which might be a potential threat to our bank accounts.

Accordingly, it is imperative for us to take drastic measures. For one thing, we should appeal to the authorities to make strict legislations to severely punish those who deliberately spoil the interests of online customers. For another, we should enhance the awareness of residents that rational purchasing is conducive to our income management. Only in this way can we maximize the merits and minimize the demerits of online purchasing. 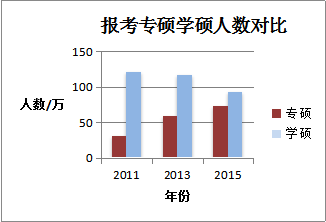 Some driving factors that contribute to the above-mentioned change may summarized as follows. To begin with, under the circumstance of Chinese booming domestic market, an increasing number of students who are expert in professional skills are badly needed. In addition, the development of job market on the whole cannot keep pace with the expansion of college graduates, which obliges many students to stay on campus for another two or three years to get better prepared for their career. Finally, we must admit that working pressure is another important factor.

Taking all these factors into consideration, we may predict that with the rapid development of our society, the number of students of professional master degree will keep growing in the forthcoming decade. 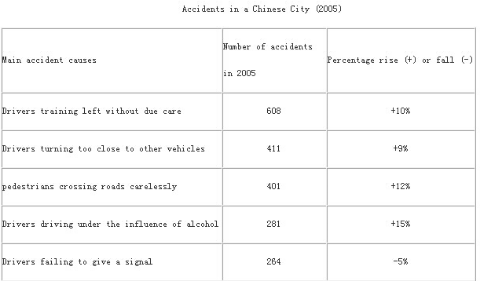 Here is a table, telling us an interesting phenomenon. There is no doubt that the table displays accidents in one Chinese city. As is clearly depicted, drivers turning left without due care cause the most accidents in this city and the percentage of drivers driving under the influence of alcohol enjoys the biggest rise in 2005. Obviously, the difference manifested by the table should be given more concern.

What might trigger this affair? For one part, the general public have failed to realize the importance of abiding by the traffic regulations and laws (and a big deal of the attention  have been distracted by the so-called “great affair”.) Once some drivers easily disregard the traffic signals, so do other drivers who intend to obey the laws. Moreover, the current state of affairs depicted in the drawing, may have been encouraged, though not justified, by the lack of severe legal penalty.

It is advisable for us to take steps to reverse this current evil trend. On one hand, we should cultivate the awareness of people .On the other hand, it is high time that more severe and sound laws and regulations should be introduced to harness and curb this matter. Only in this way, can we crack the hard nut and embrace a bright future. 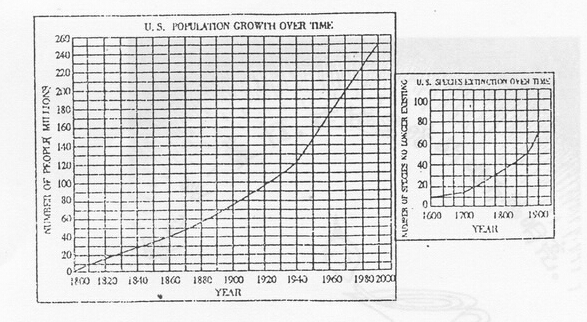 As is seen from the two graphs, it is clear that with the rapid growth of U.S. population from 1800 to 1990, the number of its wildlife species no longer existing soared during the same period. Naturally, we can draw the conclusion that the sharp decline of wildlife species resulted from the population growth.

At least three fundamental factors could contribute to this phenomenon. To begin with, as the population grows, people consume much more natural resources, which often leads to excessive hunting. To continue, with the increase of human activities, modern people take up more and more space, which has an undesirable impact on other species. Finally, the problem of pollution becomes more and more serious with the development of modern industry. More and more animals have to adapt themselves to the decaying environment or move to a totally different place, but not all of them are fortunate enough to survive the changes.

Solving this problem calls for, above all, the government’s efforts to control population growth, to decrease industrial pollution and to enhance the laws to forbid wildlife hunting. Moreover, common citizens should be aware of this ecological crisis and take on the responsibility of wildlife protection. In a word, only when the government and the common people make joint efforts can we hope to find a satisfactory solution to protect wildlife.