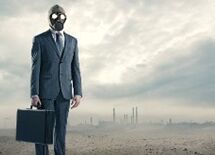 Recently,fog and haze has become a imminent threat which most northerners in China are facing.While the cities of China have greeted striking speed of development with open arms,they suffer greatly from a persistent and dense haze of pollution and smog.It is high time that we took some methods to protect the environment and ourselves.
Generally speaking,there are three effective ways.First of all,the government should take into serious consideration the emergency and severity of the air pollution,and take measure to deal with it.Such as more public transportation systems should be put in use,more energy-saving resources should be utilized.What’s more,every little effort from individuals counts.The citizens should contribute to the reduction of pollution by driving less.Last but not least,try to reduce the time of outdoor activities,especially when the air quality is not good enough.
From what has been mentioned above, to protect our air,we must keep in mind that whatever we give out,we take back in the long run.So we have to drive less,pollute less and make more changes.

可以使用的句子
暴露在雾霾空气中一直被认为可能引发哮喘和肺气肿等一些呼吸道疾病。
Exposure to smog has been linked to respiratory problems such as asthma and emphysema.
民众对雾霾天气十分不满，比如有些人给雕像带上防污染的面罩。
The smog has led to public displays of dissatisfaction, including people placing anti-pollution face masks on statues.
北京的空气污染水平最近几天已经达到危险水平，雾霾大大降低了能见度，政府提醒人们呆在室内，避免剧烈运动。
AIR pollution levels in Beijing have hit dangerous levels in recent days, with smog drastically reducing visibility and authorities warning people to stay indoors and avoid strenuous exercise.
由于汽车尾气排放，周围地区煤炭的燃烧以及建筑灰尘所造成的污染物，今年早些时候北京一度几周都笼罩在严重的雾霾当中。
Beijing was shrouded in severe smog for weeks early this year, with pollutants from vehicle emissions, coal-burning in neighboring regions and construction dust.
今年1月北京的空气污染程度飙升至创纪录水平后，中国北方不断恶化的有毒雾霾成为一个举国关切的问题。
The worsening toxic smog in northern China became an issue of national concern after air pollution spiked to record levels in Beijing in January.
多年以来，许多中国人并不在意空气质量引起的担忧，或认为雾霾是发展不可避免的副作用，而现在这一问题已成了中国中产阶层担心的焦点。
After years in which many Chinese dismissed concerns about air quality or counted smog as an inevitable side effect of development, the issue is now central to middle class concerns.