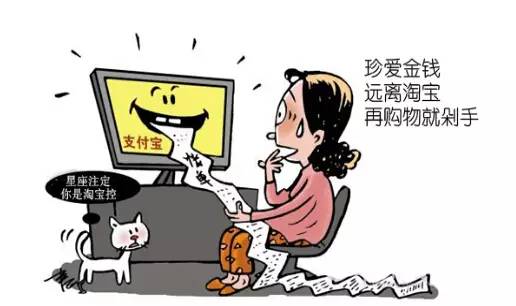 What is subtly demonstrated in the above drawing is that in front of a desktop sits a fashionable lady who is staring at the screen with shocked expression wearing on cheeks and huge sweat dropping from her forehead. What is spit from the computer is the lengthy Alipay bill, which can almost be spread as long as two meters. The caption above reads that you should keep away from Taobao and cherish your income.

The objective of the drawer is to show us that utmost attention should be paid to shopping online, which has exerted profound impact on the daily life of the average individuals. We can easily recognize its advantages: e-commerce, which is extremely convenient, can save us a great amount of precious time and we can buy products everywhere we want as long as we can surf online. However, for all the advantages mentioned above, online trading is by no means without its limitations: we may be cheated by some online retailers, which might be a potential threat to our bank accounts.

Accordingly, it is imperative for us to take drastic measures. For one thing, we should appeal to the authorities to make strict legislations to severely punish those who deliberately spoil the interests of online customers. For another, we should enhance the awareness of residents that rational purchasing is conducive to our income management. Only in this way can we maximize the merits and minimize the demerits of online purchasing. 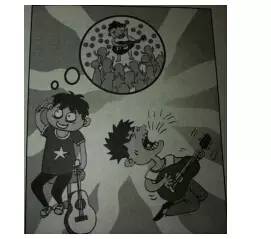 Wise people used to say that taking actions is of utmost significance in our daily life. This is most vividly illustrated in the given picture, which shows that two young boys both holding guitar are playing different life situations. The boy on the left is daydreaming about the day he gives a perfect concert and is admired by all the fans, while the boy on the right is practicing the guitar and singing skill persistently.

studying it further, it is easy to figure out that taking actions is the only way to fulfill our dream. Our country, for example, has developed rapidly in terms of economy and science and technology. We have accomplished in about two decades what other emerging countries used to achieve in a century. There is no denying that it is the perseverance and taking actions that really realize the promise they made. If you never take action to do something, you will never have a chance to win. For example, a great number of students choose to take part in the National Entrance Exam for master’s degree. However, those who dreamed of becoming the postgraduates without taking any actions are even tremble at the thought of taking the exam, most of whom are escaping the classroom when the first exam is over.

In a word, I believe, just like Forrest Gump said, “Life is like a box of chocolates：you never know what you’re gonna get. ” Unless you have the awareness that action speaks louder than the word.

What is conspicuously presented in the drawing above is a humorous (interesting/ satirical/ harmonious) scene, in which two people are trapped in two large tanks respectively. The most striking feature of the cartoon is the fact that one man, with a swim ring on his neck, struggled to get out of the tank by swimming but failed, while another person on the right chose to break the tank to solve the problem finally. Given its profound social implication (consequences), the phenomenon is well worth our endeavor to explore.

By drawing this cartoon, the author reminds us that due attention should be paid to the significance / importance of innovation, an element which plays an important role in our study and life. Looking around the world, what we are employing, experiencing, and desiring for are from those brilliant ideas. It’s the innovation that steers our society into progressive phases. As good innovators, they will not accept that there is only one way to do anything, rather than search for alternate courses, which may prove easier in the long run and be bound to be more practical. Numerous instances can be given to illustrate the importance of this spirit, from the discovery of Penicillin to the presumption of Universal Gravitation, even from the invention of one appliance to the launch of a spacecraft.

As a consequence, innovation consciousness is badly needed in every aspect of our society. In order to bring out this potential ability, our education system is supposed to be reformed fundamentally, focusing on cultivating inventive mind among elementary students. In addition, those relevant department should form a range of reasonable premium systems and other incentives to encourage and stimulate more people put their wise into reality. In brief, if one person or a nation would like to make continuous improvement, they should bear in mind that only the spirit of innovation can ensure the best prosperity.