"We are trying to make the cease-fire in Libya permanent," Erdogan said at a press conference in Ankara with visiting Italian Prime Minister Giuseppe Conte.

Erdogan noted that he will attend a meeting in Berlin on Jan. 19 to discuss Libya's peace process, along with Conte and Russian President Vladimir Putin.

"We have supported the Berlin process in a constructive way and continue to support it," he stated. 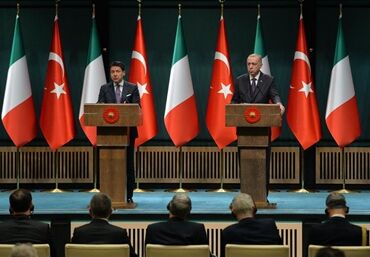 Appreciating Italy's efforts on the Libyan issue, Erdogan said the Syrian crisis was another topic of their talks.

"I stressed that we expect Italy's support for our efforts to maintain the de-escalation status of Idlib," the president said.

For his part, Conte said the cease-fire will be a temporary solution and the international community should find a permanent settlement for the Libyan issue.

The Berlin process is an important opportunity, he added.

Italy would not accept any attempt that will intervene in the sovereignty of Libya, the Italian leader said.

Moscow hosts talks for reaching a cease-fire agreement between Khalifa Haftar, commander of the east-based Libyan National Army which has been trying to conquer the capital Tripoli, and Fayez al-Serraj who heads the rival Tripoli-based UN-recognized government.

Turkey and Russia brokered the negotiations which came after a cease-fire on Jan. 12 initiated by Ankara and Moscow after 11 months of heavy clashes in Libya.

Turkey backs Serraj while Russian military contractors have been deployed alongside Haftar's forces.