"No Americans were harmed in last night's attack by the Iranian regime. We suffered no casualties," Trump said in a televised White House address after Iran launched ballistic missiles at Iraqi bases housing U.S. troops in retaliation for the U.S. killing of Iranian general Qassem Soleimani.

Trump noted in the remarks that "Iran appears to be standing down," calling it "a good thing" for all parties concerned. 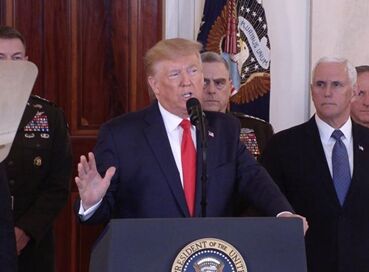 "The United States will immediately impose additional punishing economic sanctions on the Iranian regime. These powerful sanctions will remain until Iran changes its behavior," he added.

The U.S. president also highlighted the military strength of his country, which he suggested as the "best deterrent" and "does not mean we have to use it." He said he would ask NATO to become more involved in the Middle East.

In the meantime, Trump hinted at potential cooperation between Washington and Tehran. "The destruction of ISIS (the Islamic State) is good for Iran, and we should work together on this and other shared priorities," he said at the conclusion of the speech.

The Pentagon on Tuesday confirmed that Iran had launched more than a dozen ballistic missiles against at least two military bases housing the U.S. and coalition forces in Iraq.

Iran's Islamic Revolution Guard Corps (IRGC) had claimed responsibility for the missile attacks, saying that they were meant to retaliate the U.S. killing of Soleimani.