"A total of 36 people, including 14 females, were pronounced dead, as 23 others, including eight females, were injured in the collapsed building," he said at a press conference at the end of the rescue operation.

All victims were Cambodians, and among them were a male-contractor, construction workers and their family members, including children.

The building came down at around 4:30 p.m. on Friday in Kep city when workers were pouring concrete to build the seventh floor. 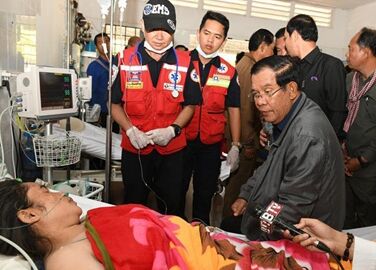 Hun Sen expressed his deepest sympathy to the bereaved families and the injured people in the incident.

He said families of the victims who died received 52,500 U.S. dollars each and those who were injured got 10,000 dollars each.

According to the provincial authority, more than 1,000 rescuers, including Chinese experts, have taken part in the rescue efforts.

Some 14 excavators, three crane trucks, two bulldozers, 10 ambulances, five firetrucks, and more than 10 dumper trucks have been used to remove the debris of the collapsed building.

During the rescue operation, excavators were used to dig out the rubble and loaded it onto waiting dumper trucks, as firetrucks sprayed waters onto the site in order to reduce dust and heat as weather was hot.

Some rescuers cut steel bars, as others tried to search victims through holes of the collapsed building.

Hun Sen said the rescue operation took 43 hours and 20 minutes, explaining that it was necessary to proceed carefully to ensure that the diggers would not harm people trapped under the rubble.

"In our rescue, we gave priority to save people's lives, so we had to remove debris carefully," he said. "When we suspected that any locations had victims trapped, we stopped excavators from removing the debris and used other means to search for them."

"I'd like to thank the experienced Chinese experts, who are working in Preah Sihanouk province, for coming to help us rescue victims here," the prime minister said.

He also hailed their methods in identifying the locations that victims could be trapped under the debris.

One of the rescuers said he tried to search for people under the rubble through the holes of debris and tried to hear their voices.

"When we suspected that there were victims, or we heard their calls for help, we removed debris very carefully," Kol Rom, 50, a rescuer from the Kep Provincial Military Region 3, told Xinhua.

The Chinese embassy in Cambodia on Sunday expressed its profound condolences to the families of the dead and wished the injured people a speedy recovery.

The embassy said in a statement that representatives of the Chinese Chamber of Commerce in Cambodia (CCCC)'s branch in Preah Sihanouk province had visited the site, brought donations and expressed condolences to the victims and their families.

As a probe into the incident has been conducted, Hun Sen blamed a male-contractor, who was also killed in the rubble, for the collapse of the building.

"A preliminary probe indicated that there were two mistakes already," Hun Sen said.

First, the contractor used smaller steel bars than the steel bars required in the building's masterplan and second, the contractor removed the wooden scaffolding supporting wet concrete slabs in 10 days, while the safe period for the removal was 28 days, he said.

"The contractor's mistake resulted in this tragedy," the prime minister said, adding that the building's owners -- a local man and his wife -- have been arrested and will be sent to court for prosecution.

An official at the Kep Provincial Land Management, Urban Planning and Construction said on Friday that the building's owner had applied for a license to construct a five-story building, but he illegally built it up to seven floors.

A file photo of the building shows that before the accident, people were living in the under-construction project. Workers who survived the tragedy also said that they had been living inside with their family members for several months.

Hun Sen said such an incident will be reduced or eliminated in the future when the recently-adopted construction law is fully enforced.