The town of Rehoboth Beach in the American state of Delaware is known for big waves, sweet treats like saltwater taffy, and a long wooden boardwalk next to the ocean that dates back to the 1870s.

It has long called itself the "Nation's Summer Capital."

Soon, it can say it is home-away-from-home for the 46th president of the United States. 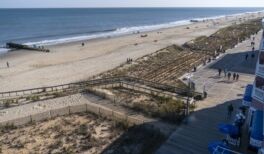 President-elect Joe Biden owns a home just blocks away from the beach in Rehoboth. It takes about two hours to get to Rehoboth from Washington, D.C. and a bit under two hours from Biden's longtime home near Wilmington, Delaware.

Biden and his wife, Jill, bought their $2.7-million beach house after he left the vice presidency in 2017. The money for the home came from an $8-million book deal that the couple had signed.

"Throughout our careers, Jill and I have dreamed of being able to buy a place at the beach at home where we can bring the whole family," Biden said in a statement after buying the house.

Rehoboth is about to change

Rehoboth only has about 1,500 full-time residents. But its population grows to about 25,000 during the summer months. Before the coronavirus pandemic, events like Independence Day weekend and the yearly Sea Witch Festival in October would draw up to 80,000 visitors.

Movie stars Richard Gere and Denzel Washington are known to visit Rehoboth Beach. But Biden would be the first president to vacation regularly in the beach town.

The changes in Rehoboth are already happening.

Biden spent time in Rehoboth Beach after the Democratic National Convention this summer. He returned last weekend, days after being projected the winner of the 2020 presidential election.

The area around Biden's home is restricted, but reporters arrived in Rehoboth Beach last weekend anyway. Television journalists gathered at the boardwalk to get a good filming spot.

The Browseabout Bookstore in Rehoboth set up a special area with books about Biden, as well as books that Joe and Jill Biden have written. The area also included things like Biden calendars, cups, coloring books, jewelry and footwear. The top seller was a special candle that smells like one of Biden's favorite drinks: orange Gatorade.

After he left the vice presidency, Biden would sometimes come to Browseabout bookstore to buy coffee and a newspaper after his Sunday religious service. "The treatment that they get is the same as everybody. We want everybody to feel welcome," bookstore worker Jessie Jones said of the Bidens.

"There was definitely a high energy today," Jones said, as word spread that Biden was back in town last weekend. "People were saying, ‘Let's do our Christmas shopping and, if we happen to see Joe, great.'"

Nick Caggiano is owner of Nicola Pizza in Rehoboth. He first met Biden in 1972, during his first run for the Senate. Caggiano said Secret Service agents arrived to pick up takeout pizzas for the Bidens when they got into town on November 12.

Rita Sonntag is a nurse who lives in nearby Bethany Beach. She went to Rehoboth last weekend to do some shopping. She then went for a walk at Cape Henlopen State Park, a nature area near the Bidens' home. She happened to see the couple as they rode bikes while surrounded by Secret Service agents.

As popular as Biden is locally, not everyone is a fan. At a nearby business called T-Shirt World, employee Sydney Doel said that the few Biden shirts the store offered were not especially popular. President Donald Trump, on the other hand, had his own section in the store, with different kinds of clothes, hats and other things. Some of the Trump-related goods sold out.

Doel said that she hoped to one day see Biden around town, but her face lit up when asked what would happen if Trump bought a house in Rehoboth Beach, too. She and another employee agreed that the rural areas outside of Delaware's beach towns are full "of country-loving people."

"If you ride out a bit, you see a lot more Trump signs," Doel said. "I think having Trump here, it would be more exciting for a lot of people."

The Associated Press reported this story. Ashley Thompson adapted it for VOA Learning English. Hai Do was the editor.
1/2    1 2 下一页 尾页