In parts of the developing world, coronavirus safety measures have fueled concerns about an increase in illegal hunting of wild animals.

Some people say the hunting is a result of food shortages and an easing of law enforcement in some wildlife protection areas. Yet at the same time, border closures and travel restrictions have slowed illegal trade of some high-value animal species.

Economic problems and food shortages have created situations in which more people have been attacking rare or endangered species.

This kind of poaching is a big concern in parts of Asia and Africa. 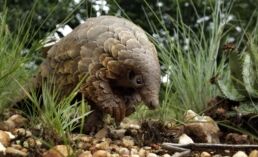 On May 9, a greater one-horned rhinoceros was killed in India's Kaziranga National Park – the first such case in over a year. Three people were arrested on June 1. They are suspected of being part of an international group of poachers. The three had automatic rifles and ammunition at the time of their arrest, said Uttam Saikia, a wildlife warden.

As in other areas, poachers in Kaziranga pay needy people small amounts of money to help them. With families losing work during the coronavirus lockdown, the poachers "will definitely take advantage" of the situation, warned Saikia.

The case of the rhino is not the only one in India.

Since India's government announced the lockdown, poachers have killed at least four tigers and six leopards, the Wildlife Protection Society of India said recently. But poachers also killed many other animals, including gazelles, squirrels, boars, and birds.

"It is risky to poach," said Mayukh Chatterjee, a wildlife biologist, "but if pushed to the brink, some could think those risks are worth taking."

Chatterjee works for the Wildlife Trust of India, a not-for-profit group.

India is not the only country to see an increase in poaching.

In Nepal, more forest-related crimes were reported in the first month of lockdown than at any time over the past 11 months. That information comes from a study by Nepal's government and the World Wildlife Fund.

In Southeast Asia, the Wildlife Conservation Society confirmed the killing of three critically endangered giant ibises for the bird's meat. In late March, more than 100 painted stork chicks were also poached in Cambodia.

"Suddenly rural people have little to turn to but natural resources and we're already seeing a spike in poaching," said Colin Poole, the society's director for the Greater Mekong.

In Africa, organized poaching has not increased much, partly because many parks and wildlife reserves have continued ranger patrols.

Ray Jansen is the chairman of the African Pangolin Working Group. He said bushmeat poaching had increased, especially in parts of southern Africa. "Rural people are struggling to feed themselves and their families," he added.

At the same time, border closures and travel restrictions have slowed international trade in pangolins and other animals. But the illegal trade continues within Africa, noted Jansen. He added that he expected a "flood of trade" once shipping opens up again.

Concerned about a possible link between the bushmeat trade and the coronavirus, several wildlife groups are calling for governments to enact measures to avoid future pandemics. Among them is a ban on the sale of wild birds and animals for food.

Others are calling for changes to the international treaty known as CITES, which restricts the trade in endangered plants and animals. They say CITES should be expanded to include public health concerns. They note that some commonly traded animals often carry viruses but are currently not subject to trade restrictions under the treaty.