The coronavirus outbreak has now affected people in over 170 countries.

The outbreak forced India's 1.3 billion people to stay at home Wednesday under a government-ordered lockdown. The coronavirus continues to spread, with some patients dying from COVID-19, the disease caused by the virus. In Spain, the number of COVID-19 deaths rose higher than the number in China.

In the United States, lawmakers finally agreed on a $2 trillion spending plan to help rescue the nation's economy. The agreement fueled rising share prices at stock markets around the world. 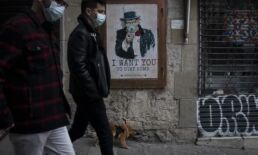 Spain reported 738 coronavirus deaths on Wednesday, pushing the number of deaths nationwide to over 3,434. That is higher than China, which has reported 3,285 deaths, and second only to Italy, with 6,820.

Fernando Simón heads Spain's health emergency coordination center. "If we are not already at the peak, we are very close," he said.

Simon also warned that the country should not ease up on its restrictions on movement anytime soon. Spain is on day 11 of a 15-day nationwide lockdown. Schools, restaurants and most businesses are closed.

The government has banned social gatherings. Spaniards are being urged not to leave their homes. The restrictions are keeping tens of thousands of workers from going to work.

The office of Britain's Prince Charles reported that "The Prince of Wales has tested positive for coronavirus." It said Charles "has been displaying mild symptoms but otherwise remains in good health and has been working from home throughout the last few days as usual."

The 71-year-old prince is staying away from other members of Britain's royal family at a property in Scotland. Tests have shown that his wife, Camilla, is free of the virus.

The royal office said "it is not possible" to find out how Charles became infected since he met many people in recent weeks. Charles also met with Prince Albert of Monaco, who later tested positive, at an event in London on March 10.

India has reported only about 600 cases of infection because of limited testing. But Prime Minister Narendra Modi has warned that if he does not act now, the virus could affect many living in the world's second-most populous country.

Modi announced that "the whole country will come under complete lockdown," starting on Wednesday, for 21 days. "This is being done to save every citizen of the country," he added.

The Indian leader listed China, the United States, Italy and Iran as places where the virus has spread, even with a good health care system. India is home to a large number of people living in poverty with poor health care.

The virus in the United States

In the United States, infections were climbing and had passed 55,000, with deaths at over 800. New York state has over 30,000 infections and nearly 300 deaths, the highest numbers in the country.

New York Governor Andrew Cuomo said that his state could be two weeks away from a major health crisis. He predicted that 40,000 people with the virus would need specialized treatment. He said this would overwhelm New York's hospitals, which now have just 3,000 intensive care units statewide.

Cuomo questioned President Donald Trump's statement that Americans should be prepared to go back to work for the sake of the economy. Trump said he "would love to have the country opened up and just raring to go by Easter," which falls on April 12. But some health officials have said the worst is yet to come.

In Washington, U.S. lawmakers agreed on a $2 trillion spending plan early Wednesday to help the country's economy. The plan would support businesses through the crisis and give Americans one-time payments of $1,200 per adult and $500 per child.

The news pushed stock prices up on Wednesday. Markets in Europe and Asia rose a day after the Dow Jones Industrial Average had its best day since 1933.

Johns Hopkins University's Coronavirus Resource Center reported that the virus has infected more than 438,000 people worldwide. Nearly 20,000 people have died from the disease, but more than 110,000 others have recovered.

In China's Hubei province, officials have lifted restrictions on movement. People who passed an inspection were permitted to travel for the first time since January.

Hai Do adapted this story for Learning English based on Reuters and Associated Press news reports. George Grow was the editor.
1/3    1 2 3 下一页 尾页