During a crisis, some people buy a lot of food and other products because of fear they will run out of them. This behavior is known as hoarding. It can cause serious problems for other members of the community.

When people hoard, stores run out of some high demand products. Suppliers face pressure to replace what has suddenly disappeared. At the same time, people who want to buy commonly used goods cannot get what they need.

During an emergency, government officials advise people not to hoard goods. But some people have built up supplies of things like food and fuel over long periods in an effort to prepare for a future crisis. Curt La Haise is one of these individuals. 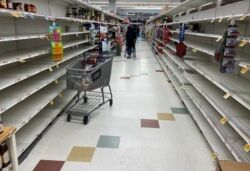 Friends of La Haise have made fun of him for years because he keeps an eight-month supply of food in his house. He also keeps enough fuel to power his generator for almost a whole winter.

But those friends who used to make fun of him are not laughing anymore.

That is because many people have been raiding supermarkets across the United States. People are worried that they will have to quarantine in their homes for weeks because of the coronavirus outbreak. Some Americans are buying as much as they can, leaving store shelves empty. Some foods and basic products including medicines and toilet paper are now hard to find in some places.

Prepping is short for preparing.

The nation has a community of "preppers" – people who keep large amounts of supplies in case of a disaster. Now, their preparations seem like a good idea.

"We're not laughing. We're not saying, ‘I told you so,' when people are out there fighting over toilet paper and hand sanitizers," said Paul Buescher of Ohio. He is one of 32 members of a group that shares a farm where large amounts of water and food are stored.

Buescher told the Reuters news agency that he is now getting requests for advice all the time.

John Ramey helped set up a website for preppers, called The Prepared. It provides information about survival and emergency preparedness.

"Every single business that has to do with emergency preparedness is overloaded," Ramey said.

People who keep a lot of emergency supplies are often shown on television or in movies as people who also have many weapons. These individuals are often called "doomsday preppers."

But Ramey said that is not the case for most preppers. "The vast majority of this is ‘beans and Band-Aids,' not ‘bullets and bunkers," he said.

Jim Cobb is a disaster readiness adviser and directs Prepper Survival Guide magazine. He dislikes the idea of other preppers gloating about people crowding stores in search of disinfectant products.

But he adds, "...for once they're not laughing and pointing fingers at us."

The new coronavirus is at the heart of the drive to buy and keep large amounts of needed products. Most people who get infected, however, do recover. There is a greater danger for older adults with existing health problems. They may take a long time to recover.

Advise from experts and preppers

Experts urge everyone to take common sense measures like keeping a distance from people, wash hands often, and cover your nose and mouth if you sneeze or cough. If you think you are sick, stay home.

Preppers are offering additional readiness measures. For one, be ready to stay at home for two weeks and have a lot of food and water supplies saved. They say do not forget medicine and products needed for dogs, cats or other pets, if you have them.

Keep need extra toilet paper, but make sure you have disinfectant cleaning supplies, eye protection and protective equipment like gloves.

Make sure your finances are organized and you have enough money to pay bills for a period of time.

Finally, try not to worry too much, but pay attention to news and what is going on around you.