Rebuilding efforts in Afghanistan have left 5,135 people killed or injured since 2002, a new report by a U.S. government group says.

The Special Inspector General for Afghan Reconstruction (SIGAR), John F. Sopko, says his report is the first to look at the human cost of rebuilding Afghanistan following the 2001 U.S.-led invasion. SIGAR monitors the billions of dollars the United States spends in Afghanistan.

The report, called "The Human Cost of Reconstruction," was released on February 11. It said that 2,214 people have been killed in mostly U.S.-led projects to rebuild the country.

It said the deaths were the result of Taliban and other militant attacks from 2002 through 2018. It did not include accidental or other deaths connected to the reconstruction projects. 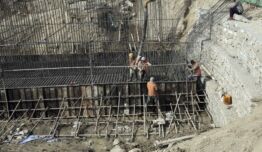 The report added that another 2,921 people were wounded in the rebuilding efforts - from the construction of roads and bridges to building schools. Such projects are often seen as easy attack targets.

Other projects included counter-narcotics, governance, and mine removal.

SIGAR said the most dangerous job was road construction, which made up "30 percent of all casualties."

SIGAR also found that 1,182 people were either kidnapped or went missing. The report did not say how many of those kidnapped had been recovered.

Most of the casualties, the report shows, happened during the height of the reconstruction efforts -- between 2008 and 2011.

The United States has spent nearly $1 trillion in Afghanistan, the majority of which has been spent on security and war-fighting costs.

About $137 billion has been spent on Afghan reconstruction and aid since 2002.

The latest findings come during renewed U.S.-led peace talks with the Taliban. The talks are aimed at opening the way for withdrawing American troops.

The Taliban today controls or has influence over about half of Afghanistan. They carry out almost daily attacks targeting Afghan and U.S. forces, government officials and those seen as linked to the government.

The 18-year-long war in the country has been deadly for Afghan civilians. The United Nations first began documenting civilian casualties of the Afghan war in 2009. It estimates that between then and October 2019, a total of 34,677 Afghan civilians have been killed.

The deaths happened during insurgent attacks as well during fighting between militants and Afghan security forces and allies in the U.S.-led coalition.

The Taliban denied involvement in the bombing and there was no immediate claim of responsibility for the attack. It was the first major attack in the capital this year, and took place in the morning near the government-run defense university.

Anne Ball wrote this story with information from the Associated Press, Reuters and RFE/RL. Ashley Thompson was the editor.