SANAA, Feb. 20 (Xinhua) -- "I am 72 years old. I have been here for more than six years," said Ahamed Abyadh, who is an internally displaced person (IDP) at the Dharawan camp near Yemen's capital Sanaa.

"In my hometown, my wife and 10 of my children and grandchildren died in a bombardment. The rest of us escaped death and came here," said the old man, who came to the camp during the first year of the ongoing war.

When arriving here, they thought they finally found safety and shelter in a small tent, some 40 km northwest of the country's capital. 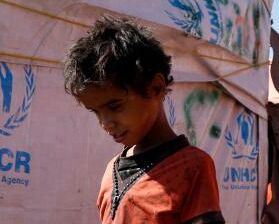 However, as the war drags on, what was supposed to be a makeshift shelter for over 300 IDP families gradually become a permanent slum, where the IDPs waited futilely in destitution and squalidness.

"Every day, I have to go to the open dump and find plastic bottles or bags so that we have something to stoke the fire for cooking and warming. We are homeless out here, in the cold and wind," the old man lamented.

Located at the center of the Yemen Highlands, Sanaa is colder than most parts of the Arabian Peninsula. Its winter, especially at night, can be tough for those who have no roof above them.

"Life in here is getting harder. I accidentally broke my leg and it was badly treated. Now I can't do heavy work. Scavenging is the only way for me to survive," Abyadh said.

Years of war and blockade have plunged the Arab country into what the United Nations calls the world's biggest humanitarian crisis.

A staggering 80 percent of the country's population, or over 24 million people, require some form of humanitarian assistance and protection, including more than 12 million children, according to data released by the United Nations.

Inside the Dharawan camp, garbages are scattered between the tatty tents and huts. Children play in the mud with garbages collected from nearby dumpsites, such as wheelless bikes and one-leg dolls, as their toys. Most of their toys were excavated by themselves because all families have to send out the children to collect garbages for the exchange of food.

The United Nations warned this week that Yemen is speeding toward the worst famine the world has seen in decades.

Malnutrition rates are at record highs. Across Yemen, more than 16 million people are starving, including 5 million who are just one step away from famine. About 400,000 children under the age of 5 are severely malnourished.

Om Fadhl, a widow, lives with her three children in a tattered tent. Her husband was wounded during the war and eventually died because of the lack of proper treatment.

"My children and I have to go to collect plastic bottles. We sell them to buy food," said Fadhl, who was wearing an oversized crumpled men's coat, which she found at a dumpsite. Most of the "possessions" inside Fadhl's tent were scavenged by her or her children.

Fadhl said her heart aches when she watches that her children couldn't fall asleep at night because of the cold and hunger.

"I wish I can return to our home. If we have to die of starvation anyway, I prefer to die home, not here," said Fadhl.