WASHINGTON, Sept. 10 (Xinhua) -- U.S. Senate on Thursday failed to advance a slimmed-down Republican COVID-19 relief proposal, as lawmakers remain deadlocked over the scope and size of the much needed stimulus bill.

All Democrats and one Republican, Senator Rand Paul, opposed the legislation in a procedural vote, making it unable to get the 60 votes needed to advance in the upper chamber. The vote was 52-47. 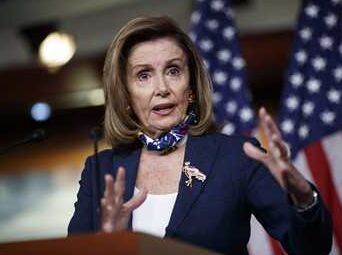 U.S. Senate Majority Leader Mitch McConnell lashed out at Democrats for blocking the narrower COVID-19 relief proposal, saying that Democrats' goal is to offer no help for American families before the November presidential election.

"Every Senate Democrat just voted against hundreds of billions of dollars of COVID-19 relief. They blocked money for schools, testing, vaccines, unemployment insurance, and the Paycheck Protection Program," McConnell said in a tweet shortly after the vote.

House Speaker Nancy Pelosi and Senate Democratic Leader Chuck Schumer, however, said in a joint statement earlier that the bill "doesn't come close to addressing the problems and is headed nowhere."

"This emaciated bill is only intended to help vulnerable Republican Senators by giving them a 'check the box' vote to maintain the appearance that they're not held hostage by their extreme right-wing that doesn't want to spend a nickel to help people," said the Democratic leaders.

Economists have warned that the U.S. economy is at serious risk of sliding back into recession if the White House and Congress couldn't reach a deal on another fiscal rescue package in the coming months.