Asked at an end-of-tenure press conference to comment on disdain for multilateralism and violation of international law, Muhammad-Bande said the United Nations has been very clear about the necessity to respect international law.

"The United Nations is a member state-based organization and it operates on the basis of what they are able to do together. This constitutes some of the difficulties," he said. 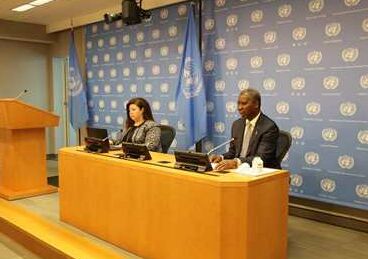 Difficulties appear especially when countries that are extremely important to international peace and security behave more nationalistically, he said. "However, this is not to put us to the point to say that we have abandoned the (UN) forum. We have not abandoned the forum."

If the forum had been abandoned, the amount of chaos that the world is seeing today would have been far worse, he said. "I think what we have to do is to continue to work even harder to insist on what is right and to have coalitions that continue to push together so that no country, big or small, will think there are no consequences to defy the rest of the membership."

Asked about the emergence on Twitter of a hashtag for defunding the United Nations, Muhammad-Bande said he was not aware of a concerted effort to defund the world body.

There have been ongoing efforts to reform within the United Nations, he noted.