BANGKOK, Feb. 9 (Xinhua) -- The nearly 18-hour shooting rampage that killed at least 27 people in Thailand's northeastern province of Nakhon Ratchasima ended, as the gunman himself was shot dead by security forces on Sunday.

Thai police announced that at 9: 00 a.m. on Sunday, the alleged gunman, Sgt. Maj. Jakrapanth Thomma was shot to death inside Terminal 21 shopping mall.

Thai Prime Minister Prayut Chan-o-cha who visited the injured at Nakorn Ratchasima hospital on Sunday, confirmed that 27 people including the shooter died and 57 people have been injured.

The shooting spree began when he shot and killed his commanding officer at a house near the Surathampithak army camp on Saturday afternoon. 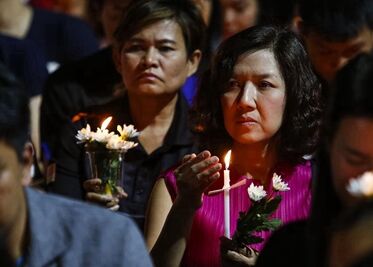 Police said Jakrapanth stole a Humvee type vehicle, drove to the camp where he killed at least two Army officers to get access to weapons and ammunition.

As he was heading to the city, he fired at civilians and police along his way.

Local media reported that the gunman was previously engaged in a verbal row with his superior and wanted revenge.

Jakrapanth posted onto social media of several messages, photos and videos along the way to Terminal 21 shopping mall.

As he arrived at the shopping mall around 6:00 p.m. on Saturday, the 32-year-old gunman got out of the vehicle and fired at motorists in the traffic and pedestrians.

One of the selfies on his Facebook page shows a huge flame on the background.

The blaze is believed to be a gas cylinder explosion which was caused by his gunfire.

His Facebook page was taken offline about an hour later.

When Jakhaphan entered the shopping mall, no one can confirm the exact number of people crowded inside doing weekend shopping.

However, throughout the night, hundreds were seen fleeing the building.

Police commandos and soldiers were dispatched to the scene to hunt for a gunman holing up in one of the largest shopping mall in the northeastern city.

Security officers put in efforts in rescuing innocent people who were hiding in behind staircases, refrigerators and storages.

On Saturday, local media reported that Jakhaphan held 16 people with grenades on his body, however, authorities could not confirm the number of the hostages.

Around 100 people escaped from the shopping mall just before midnight.