Despite a lack of credentials (he never got round to earning his PHD; friends joked that he was the world's most accomplished graduate student), he was plainly clever. By the age of five, growing up in Berkshire, he had tried to calculate how many atoms there were in the sun. His leisure reading as a teenager was Piaggio's "Differential Equations"; and he had solved that quantum electrodynamics puzzle, without pen or paper, while riding in a Greyhound bus. 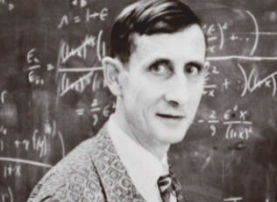 His very cleverness, his vivid language and his faith in the potential of science—which marked him as it marked the century—meant that, even when his schemes were wildly bizarre, they were not dismissed. Colleagues respected him too much. And the schemes came thick and fast. He proposed using genetically altered trees to turn comets into places where humans could resume an "arboreal existence"; these trees would grow hundreds of miles high, until the comet would look like a sprouting potato.

He also popularised a wild thought called the Dyson sphere, a gigantic shell made of pulverised asteroids that might be spread by a very advanced civilisation round its parent star to capture all its energy. (Looking for such structures and their infrared glow elsewhere in the galaxy, he argued, might be a good way to detect super-advanced aliens.) He imagined plants that could grow greenhouses round themselves, and genetically altered microbes that could harvest minerals and clear up plastic litter from space.